Since October 2021, Ericsson and Apple have been engaged in a 5G FRAND licensing dispute that started to escalate in December, just days before the two corporate giants’ 2015 licensing agreement ended.

No doubt the patents of both companies are “essential” enough to be brought to litigation, but we are curious about the actual quality of the patents-in-suit. Will they withstand trial and invalidity challenges?

In this first installment of the two-part article, we will go over the events in the dispute and conduct a patent analysis of the patents-in-suit to examine their quality. Then, we will look at Ericsson’s 5G standard essential patent portfolio compared to the global market and Apple’s portfolio in our second installment.

If you want to skip the brief, click on each section below to get insights on the patents-in-suit!

The dispute between Ericsson and Apple started on October 4, 2021, when Ericsson filed a FRAND complaint against Apple (EDTX-2:21-cv-00376) stating that Apple refuses to renew their 5G SEP licensing agreement, despite Ericsson being willing to license under FRAND terms.

Apple filed two motions in response and countersued Ericsson just days before the agreement expired in December to 1) dismiss Ericsson’s case and 2) seal Ericsson’s complaint since it contains confidential licensing agreement information. Apple reasoned that it should get lower royalty rates since it now has five times as many cellular SEPs as it did at the last agreement. We will look into this in Part 2 of this article.

During this time, Ericsson filed foreign complaints in other jurisdictions against Apple, such as in Belgium and Brazil, according to Apple’s countersuit complaint (page 3).

In this article, we will be examining the patents both Ericsson and Apple used in District Courts and the ITC complaints.

Here is a summary of the events that follow the initial complaint until today (February 2022): 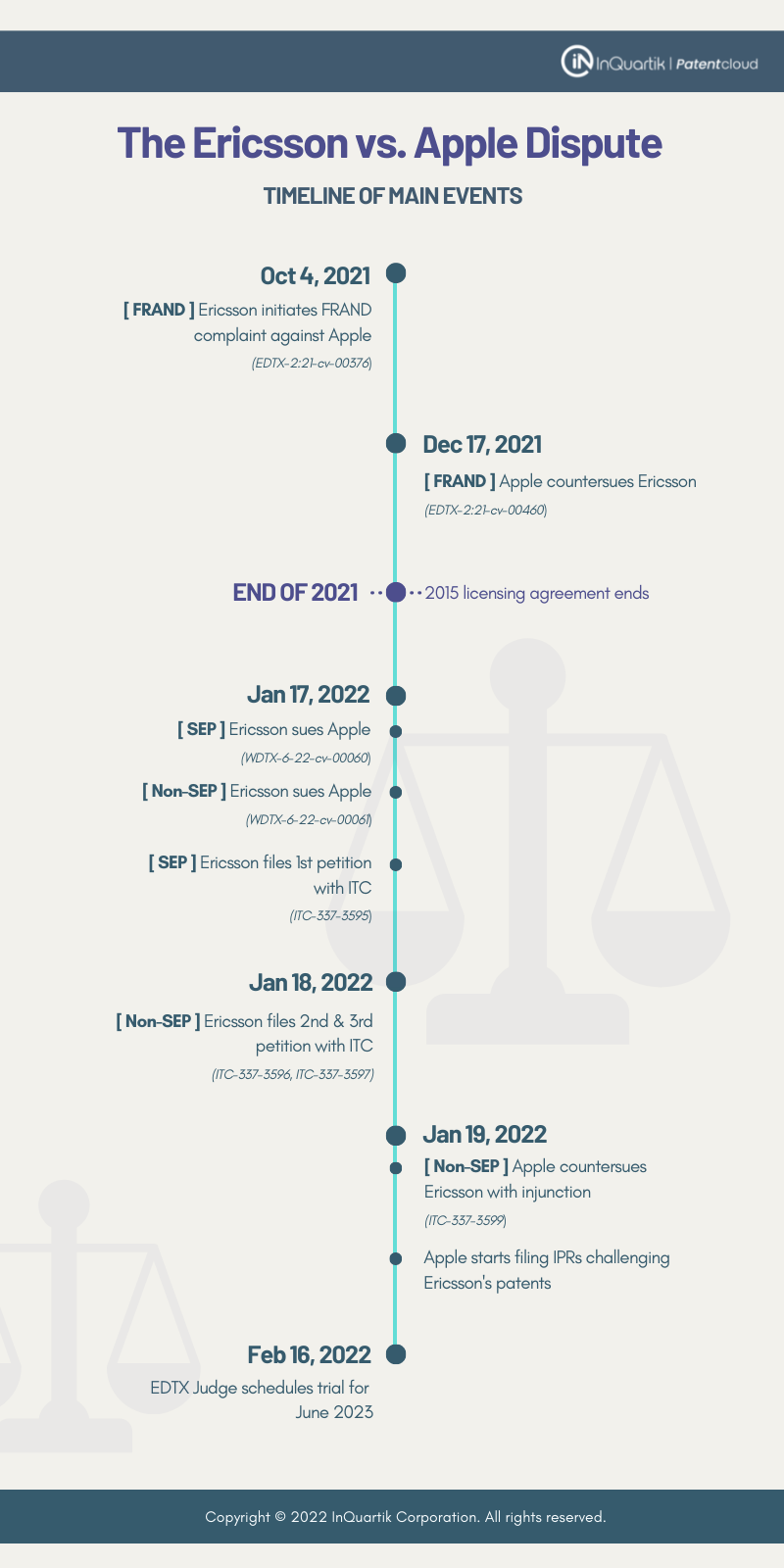 Here we can see the list of patents Ericsson used in the lawsuits: 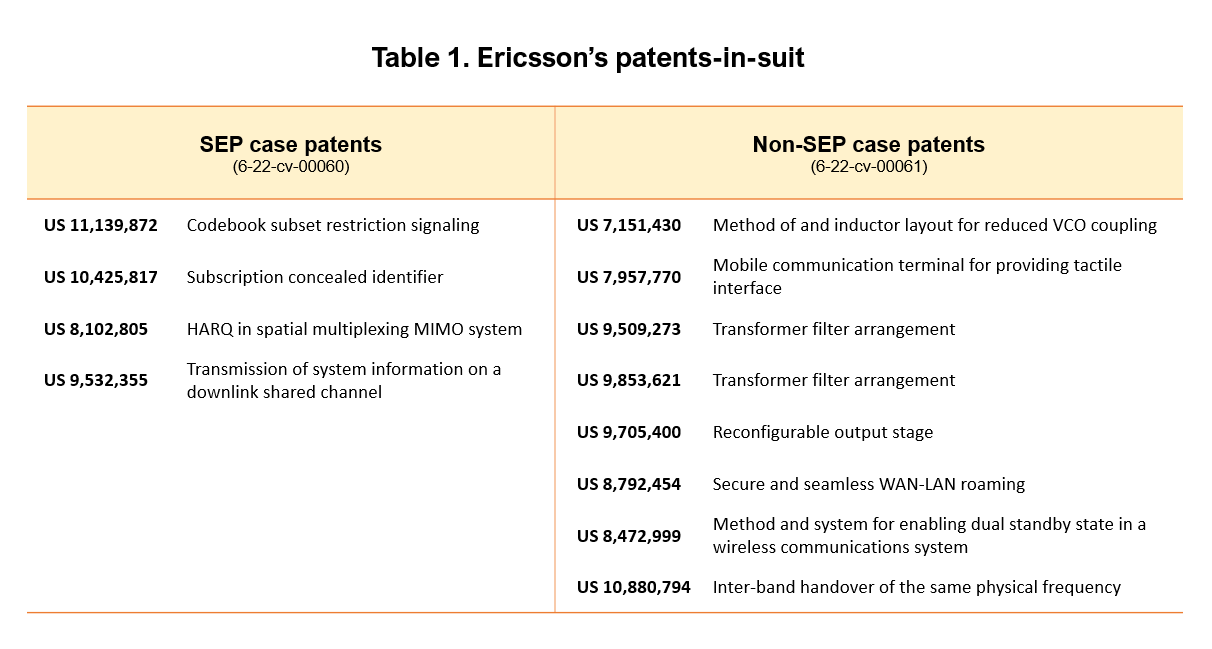 The newest patent is the ‘872 SEP which was just issued last year (2021) in early October, around the time Ericsson filed its first complaint.

Looking at the SEP case, apart from the newest patent ‘872, Ericsson had used the other three patents against Samsung in December 2020 (EDTX-2-20-cv-00380), before the two companies signed their licensing agreement in May 2021. Also, the ‘805 patent was used in February of 2015 against Apple. Ericsson and Apple entered their previous licensing agreement later that year on December 21, 2015.

As for the non-SEP case, patent ‘430 was also previously used against Apple in 2015 and Samsung in 2021. The rest of the patents are relatively new to litigation as they have no other litigation history than the recent cases.

All four of the standard essential patents declared with ETSI correspond to 5G radio technology. In the table below, we can see the patents’ declaration information and technical specifications.

Here are Apple’s three non-SEPs used in its ITC petition (ITC-337-3599) against Ericsson:

Apple’s three patents-in-suit are relatively new, mostly issued between 2017 to 2019, and have no other litigation history as well.

Now that we have an idea of each set of patents in the cases, let’s see if we can find any insights.

First, we examined the patent portfolio of each case with Due Diligence to see if we could find any preliminary insights.

What can the portfolios’ coverage and status tell us?

Ericsson’s SEP case portfolio shows a fair global coverage, with family members deployed in 23 jurisdictions. 56 out of the 81 applications (69.1%) are active patents in this portfolio. Only 4 are inactive patents that are filed with WO.

Here is Apple’s ITC case portfolio, which consists of two families and 18 applications deployed in 7 regions. Twelve (66.67%) of the applications are active patents and only 3 are inactive.

To summarize, about 70% (92/132)of Ericsson’s two portfolios are active patents, which is slightly higher than Apple’s active patent percentage of 66.67%. Globally speaking, the status of the portfolios, coupled with the coverage status and remaining life information, Ericsson’s portfolio stands a better chance of being licensed or litigated.

Also, as the SEP case portfolio has a wide coverage status, Ericsson can enforce these patents in other countries, and not just the U.S., as we already see with the complaints filed in Belgium and Brazil. This also indicates that companies with business in the other countries that are covered by Ericsson’s SEPs may also be potential licensing or litigation targets for Ericsson.

Now, let’s scrutinize the patents-in-suit and their portfolios for existing or possible invalidity issues.

We can find patent quality issues by examining issues encountered during prosecution and potential prior art. (Note: only U.S. patents were included in this scope of quality analysis)

Quality issues found in a patent’s prosecution history will include:

As the novelty requirement is often considered the most important element for patentability, we will be focusing on the §102 issues in this section.

Using Quality Insights, we can see the patents in each case that had encountered a rejection based on §102 grounds in the table below.

It seems that the majority of the patents brought up by both parties in the cases encountered novelty issues during prosecution. Even though these patents overcame the issues and were granted, this does not mean that they cannot be re-used as future grounds for challenges.

Looking a bit broader, we can look at the quality issues found with Due Diligence with the Eligibility and Novelty Issues chart. This chart highlights U.S. patents in the portfolio that have eligibility, novelty, obviousness, and indefiniteness issues (35 U.S.C §101, §102, §103, and §112) in their prosecution history and PTAB history. A patent with quality concerns may also indicate that its family members have similar quality issues.

Focusing only on novelty issues, Ericsson’s SEP case has 4.84% applications with novelty issues, followed by its non-SEP case with 9.8% and Apple’s portfolio with 11.11%.

These results show that Ericsson’s SEP case patent portfolio has a lower percentage of patents or applications with quality issues.

We can also examine the percentage of abandoned or revoked family members in a portfolio for some insights into a portfolio’s quality.

Table 4 below shows how much each patent’s claims are disclosed by prior art. In other words, Quality Insights found at least one prior art cited by the examiner during prosecution that substantially or partially disclosed the claim elements.

Most of the patents have been substantially or partially disclosed. We can see an example (the ‘817 SEP) here:

Apart from existing issues brought up during prosecution, we can also look at the number of potential prior art Quality Insights found. These include §102 issues found in the prior art of family members and in the 2nd and 3rd-degree prior art list.

High indicates more than three references were found, followed by Medium (1-2 references), and Low (0 references). We can see this in Table 5.

Our analysis results of the portfolios find that Ericsson’s SEP portfolio shows the best quality, with the widest coverage and the longest remaining life. The percentage of active patents is fairly similar between all of the portfolios. However, some of Ericsson’s non-SEP patents-in-suit will start to expire in the next few years.

When we combine the validity factors we previously covered (prosecution issues and potential §102 prior art), we can find the patents-in-suit that probably have a lower chance of withstanding invalidity challenges and which company owns them.

The patents in each case that encountered §102 rejections, are substantially disclosed, and have a high number of potential §102 issues are listed below.

In the lawsuits, two out of Ericsson’s 12 patents have lower quality, whereas Apple has two out of three. These findings seem to indicate that Ericsson has brought out better-quality patents from its arsenal than Apple. They can be listed as the patents for top scrutiny by the legal teams on both sides.

On the other hand, if we examine those patents that didn’t encounter §102 rejections, have claims that are partially or not disclosed, and have a low number of potential §102 issues, we can find the “clean” or high-quality patents in each case.

Although we found potential quality concerns in both companies’ portfolios and among the patents-in-suit, the overall quality of all the patents is fairly sound. Ericsson’s patents look slightly better, quality-wise, but this may not be the critical factor in determining the outcome of the dispute. (Ericsson’s patents definitely look more licensable than Apple’s.)

Our findings also hint that Apple may be faced with a tough fight against Ericsson unless they can come up with patents of higher quality.

No doubt, Apple might still need to license from Ericsson, just like Samsung, which was sued in early 2021 and quickly reached a licensing agreement with Apple in May 2021. However, In this dispute, the quality of the patents and how they will hold up in trial may affect the final royalty rates determined in the agreement.

Whether Ericsson will be able to license out its 5G SEPs for its announced “reasonable royalty rate of $5 per 5G/NR multimode compliant handset” remains to be seen, as Judge Gilstrap of the Eastern District Court of Texas scheduled the trial for June 2023. We may also see new patent infringement cases instigated by the two companies in the near future.

Check out Part 2 of this article in which we will examine Ericsson’s and Apple’s 5G standard essential patent portfolios, along with their global stance.

You can also try out Due Diligence to analyze your own portfolios or look at the patent portfolios in this article. Just click on the button below:

If you are interested in digging for more quality issues, such as §103, §112, or double patenting, you can check out the Quality Insights report for each patent here:

Subscribe to receive the latest insights right in your inbox.